As part of its commitment to supporting the best emerging art talent, Artspan.com is delighted to announce awards to exceptional seniors graduating from the BFA program at Moore College of Art and Design in Philadelphia. At a ceremony on April 25, 2012, six Moore seniors were presented with the first-ever Artspan Awards by Founder and Director Eric Sparre.

The award recipients, selected by faculty in their respective departments, will each receive their own full-featured, top-level website with Artspan.com for a full year, giving them an immediate launch into their professional careers. Designed to easily put artists in full control of their online presence and marketing, these Artspan websites are completely customizable and include unlimited images, email accounts, mailing list management, e-newsletter tools, stats, a personal blog, and sophisticated e-commerce capabilities, including integrated shopping carts and an optional prints-on-demand feature, plus access to a wide range of marketing tools and advice. The websites will also be linked to the central portals and searches of Artspans high-traffic main site, a major online art destination that consistently ranks in the top results for Contemporary Art in the major search engines. 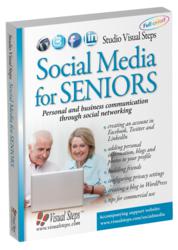 According to comScore, a digital measurement company, 27.4 million people age 55 and over engaged in social networking in July 2010, up from 16 million one year ago. The Pew Research Centers Internet & American Life Project, social networking has almost doubled among people ages 50 and older.

For millions of people, Facebook, Twitter, LinkedIn, WordPress and other social media websites have become an integral part of everyday life for both personal and commercial purposes.

You can hardly find a company, club, newspaper or television program that does not have its own page on Facebook or Twitter. For many celebrities, clubs and sports organizations, such a page has proved to be an indispensable form of communication.

Social media has also truly revolutionized how society communicates, how people interact and how information travels.

Using the unique Visual Steps teaching method, this easy-to-use book will acquaint the reader with Facebook, Twitter, LinkedIn and WordPress. Learn how to create an account, how to input key information, how to take advantage of each sites capabilities including creating messages incorporating hyperlinks, photos and videos. Also covered are the key steps to adding contacts, friends and building a social network for each respective media site. Understanding privacy settings and how to manage the flow and access to information is crucial in the world of social media. These issues and topics are fully addressed in this book.

Whether for personal or professional purposes, social media is an indispensable tool for staying in touch and building community. Understanding how to use social media effectively opens up major opportunities. Take advantage of all it has to offer and understand it with this comprehensive book.

Topics covered in this book:

Based on information recently released from the Centers for Medicare and Medicaid Services (CMS), seniors can expect to pay slightly higher monthly Medicare Part D plan premiums in 2013. The 2013 Part D base beneficiary premium is $ 31.17 as compared to a base premium of $ 31.08 in 2012.

Seniors are reminded that the slightly higher 2013 base monthly premium figure does not necessarily mean that their current Medicare Part D plan premium will remain the same or be increased next year, notes Dr. Susan Johnson, Technical Director of the Q1Medicare.com site and co-founder of Q1Group LLC. Rather, the recently released 2013 base premium only suggests that seniors will be able to shop around and find a 2013 Medicare prescription drug plan with about the same monthly premium as they are currently paying.

Because of the slight increase in the Medicare Part D base premium, Medicare beneficiaries who have accrued a late-enrollment penalty (or LEP) will notice that their 2013 monthly penalty payment will be slightly higher. The late-enrollment premium penalty is assessed to any Medicare beneficiary who is without some form of creditable prescription coverage for more than 63 days and does not qualify for the low-income subsidy. The penalty is calculated as an additional monthly payment of 1% of the annual base Medicare Part D premium accumulated for each month that a person is without prescription coverage. For example, a person who has been without creditable prescription coverage for five years (or 60 months) will pay a 2013 monthly penalty of $ 18.70 or 60% of the 2013 base premium of $ 31.17. Annual changes in the base premium used to calculate the late-enrollment penalty can be found at: Q1Medicare.com/LEP.

Along with the base beneficiary premium, CMS also released the low-income subsidy (LIS) benchmark premiums for the 34 Medicare Part D prescription drug plan regions. Each of the 34 stand-alone prescription drug plan regions sets an annual premium benchmark and drug plans with premiums under this benchmark qualify for the LIS (or Extra Help) $ 0 monthly premium. For the 2013 plan year, 24 regions increased and 10 regions decreased their benchmark premiums. A complete list of the 2013 LIS premium benchmark amounts with a comparison to past years can be found at: Q1Medicare.com/LISBenchmark.

The 2013 annual Open Enrollment Period will begin on Monday, October 15, 2012 and continue through Friday, December 7, 2012 with Medicare plan coverage beginning on Tuesday, January 1, 2013. The details of the 2013 Medicare Part D and Medicare Advantage plans should be available in late-September or early-October and Q1Medicare.com now offers a free eMail 2013 reminder service to keep Medicare beneficiaries informed as the 2013 Medicare plan information becomes available. The reminder services can found directly at Q1Medicare.com/RemindMe.